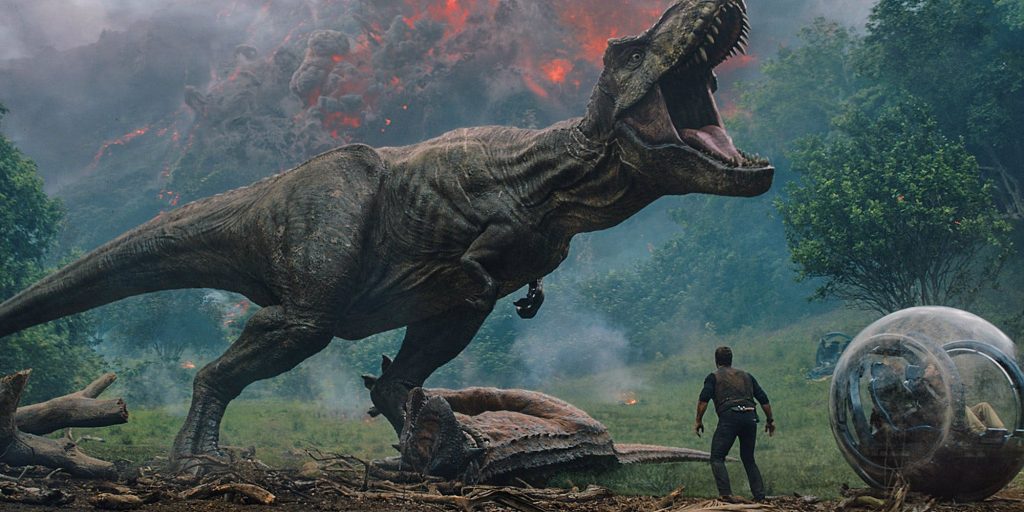 That was the first full-length official trailer for the Jurassic World sequel, Jurassic World: Fallen Kingdom. The darker and more action-packed film releases in the UK on June 8th 2018 and in the US on June 22nd 2018; featuring the return of Owen Grady and Claire Dearing (Chris Pratt and Bryce Dallas Howard) to the dinosaurs inhabited on Isla Nublar, in a desperate bid to save the creatures from the imminent eruption of the volcano.

The trailer also sees the return of Jeff Goldblum’s character, Ian Malcolm, who appears in the scenes set off the island in a courtroom repeating his ever-memorable quote of “life finds a way.”

J.A. Bayona, former director of The Orphanage and The Impossible, takes the script on from Jurassic World (2015) and is working alongside Colin Trevorrow and Steven Spielberg as producers. Spoilers aside, this first official trailer is only from the first 57 minutes of film, so says Mr Trevorrow below, so there’s still plenty of tension to build and questions to be asked.

Everything in the trailer is from the first 57 minutes. https://t.co/9GCJkrSpZg

You’re probably as stumped as we are trying to make out exactly what’ll happen in the second part of the film based on the official trailer; if the queen of dinosaurs has anything to do with it, we know you’ll be in for one helluva ride. What we do know, however, is that Owen Grady’s team of dinosaur protectors are trying to do exactly that, protect them from impending doom and the wild dinosaurs are obviously trying to survive on instinct themselves. That’s all we got!

Best guess is a proper tense encounter that requires a bit of teamwork to escape the lava-sodden land. Standard. We have to remember this is only the first official trailer for Jurassic World: Fallen Kingdom, so there’ll be much more to expect in the coming months if you’re not convinced by this then hold on for a little while longer.

[Fallen Kingdom] is going to be a scarier version, a little bit darker and will continue to expand and carry the story forward in a way that’s really unexpected and you wouldn’t have imagined.

We can work with that, cheers Chris.

NIGHT SLIDES
A promise of quality reads for guys and girls interested in cool stuff that we all share a vested interest in writing about. As passionate supporters of mental health care, in particular the prevention of male suicide, we'll continue to promote "it's ok not to be ok" conversations.