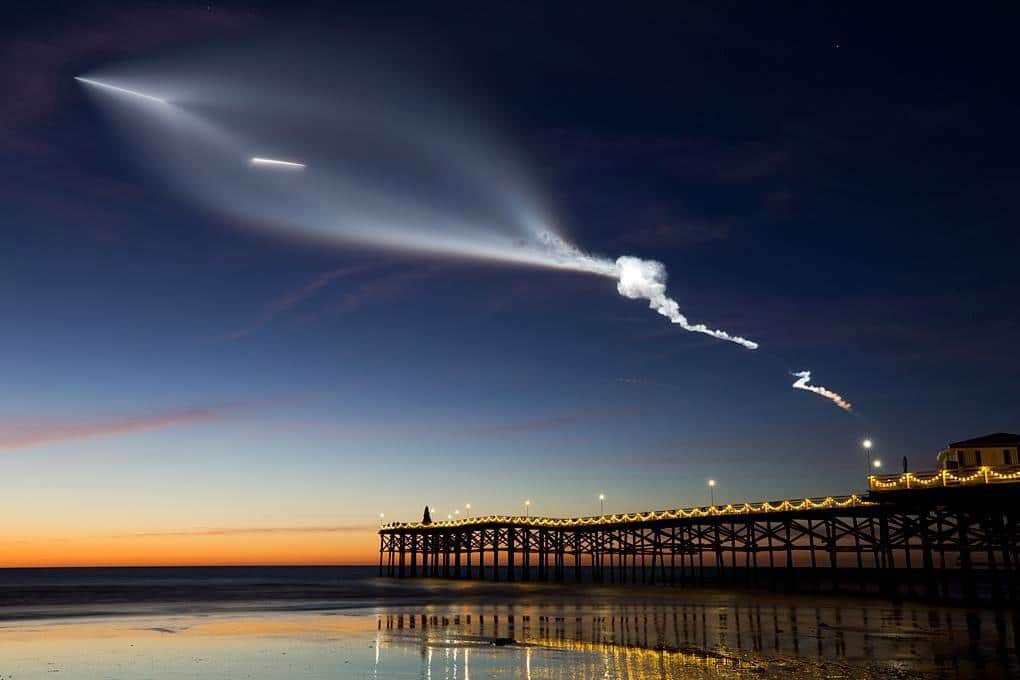 In California early evening on Friday 22nd December, SpaceX’s Falcon 9 rocket successfully lifted off from the Space Launch Complex at Vandenberg Air Force base, carrying the Iridium-4 mission to orbit. As part of SpaceX’s impressive attempt of shooting satellites into orbit, Iridium-4 was the fourth set of ten satellites that’ll complete the next global generation of intergalactic hardware for Iridium NEXT.

As a result of that launch came impressive visuals over the Southern Californian night sky as the setting sun illuminated expelled gas from the rocket. Plenty of awesome alien-like social posts to go with it, too.

Here are some of the best…

Timelapse of last night’s @spacex Falcon 9 rocket launching some iridium NEXT satellites into orbit! Absolutely breathtaking experience to see this happen live. Huge thanks to all of you that shared my work, and to those that recognized my uncredited work and gave me a heads up. If you see someone post someone else’s work, please say something. I planned this shot a long time ago, captured something well beyond my expectations and it sucks seeing it spread so far without credit. Happy holidays earthlings. 👽🍻 . #way2ill #artofvisuals #aov #hubs_united #superhubs #theimaged #thecreatorclass #illgrammers #moodygrams #agameoftones #fatalframes #killeverygram #createcommune #longexposure_shots #amazing_longexpo #best_timelapse #night_excl #timelapae #canon #canon_photos #primeshots #ourplanetdaily #greatshotz #earthpix #🚀 #rocket #falcon9 #spacex #instagood @beautifuldestinations @earthpix @ourplanetdaily @artofvisuals

As many residents in Los Angeles, California, didn’t really know a rocket ship was launching with the potential to produce alien-like visuals in the night sky, many thought – like anyone would – that they’d just seen a UFO or that some kind of missile attack was happening. SpaceX CEO, Elon Musk, didn’t exactly help matters either, joking that the launch was a “Nuclear alien UFO from North Korea” 😂 classic Musk.

The SpaceX Iridium-4 launch on video

If you have a spare half-and-a-half anytime soon, get watching the below.

Next up is the Falcon Heavy launch in January 2018

If you can’t wait until the next SpaceX rocket ship launch then good news! You don’t have to wait long at all as Elon Musk has announced they’ll be launching Falcon Heavy in January. The rocket ship has three rocket cores and three times the thrust of Iridium-4. Two of those rocket cores will be returning to base and doing synchronised aerobatics(!) with the third aiming for a droneship – yeah, alright then Elon!