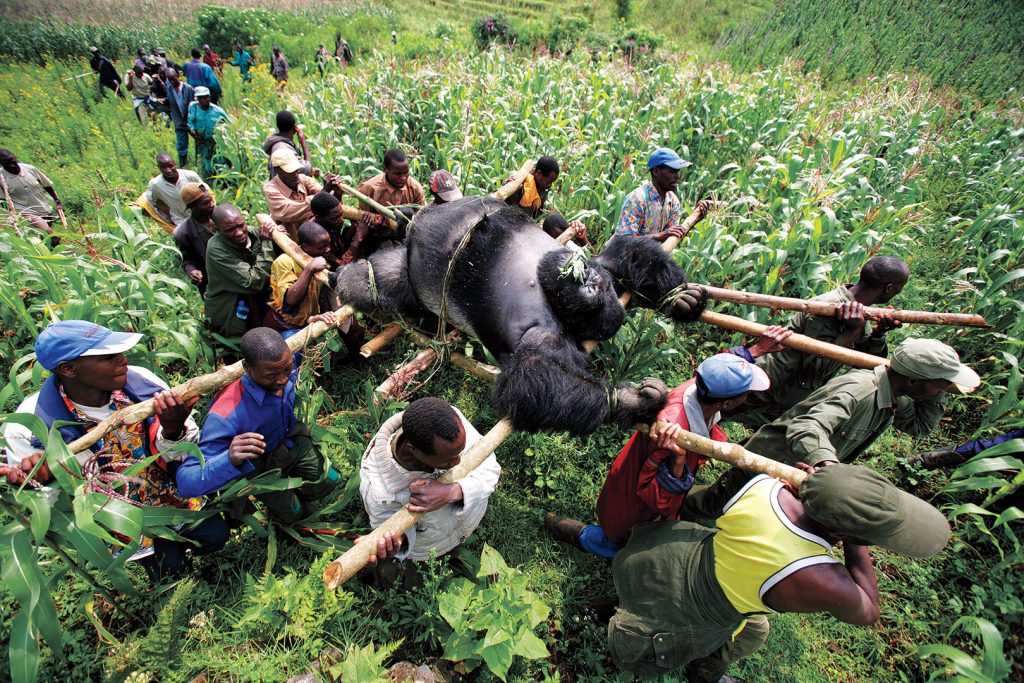 The first issue of the magazine was printed within the first year of the Society being established. Initially, the purpose was “to increase and diffuse geographic knowledge” but nowadays, as one of the world’s most renowned nonprofit organisations, they’re committed to exploring and protecting our planet through research and conversation projects hoping to inspire new generations with educative initiatives.

In the past 130 years, there have been some pretty iconic magazine covers in National Geographic. Today, we’re looking back at the most important, not necessarily most recognisable, photographs that have been chosen to grace the cover of this famous magazine.

Starting with Neil Armstrong’s world famous photograph of Buzz Aldrin space walking over the surface of the moon. This shot featured in Volume 136, No. 6 in December 1969 and included special recordings of “sounds of the space age” making it a worthily iconic cover.

Did you know, Neil Armstrong took a National Geographic flag with him on his space voyage and consequently presented it to the Society’s president at the time, Melvin Payne, after being awarded the Hubbard Medal in 1970.

Conversations with a gorilla (October 1978)

Next up is a particularly poignant cover from October 1978. It’s a self-portrait by Koko who, at the time, was a 7-year-old “talking” gorilla. She was the focus of Francine Patterson’s career as a developmental psychologist and also has become a dear friend to many including Robin Williams.

Sadly, Koko died peacefully in her sleep in June 2018 aged 46. The Gorilla Foundation commented on her passing “Her impact has been profound and what she has taught us about the emotional capacity of gorillas and their cognitive abilities will continue to shape the world.”

When Steve McCurry visited a refugee camp near Peshawar, Pakistan in 1984, little did he think he was about to take one of the world’s most iconic portraits. His image of a young Afghan girl named Sharbat Gula was taken on a Nikon FM2 film camera and accompanying Nikkor 105mm f/2.5 lens.

Not only was this photo culturally sensitive, it was also taken in one shot by Steve and under tight timescales. The capture of Sharbat’s haunting green eyes tell a deeper meaning of life in Afghanistan at the time and is, quite simply, a spectacular photograph.

The Serengeti National Park, a centre point of several magnificent wildlife areas across northern Tanzania has remained largely unchanged for millennia. Every year, one of the greatest animal migrations on earth takes place; it’s estimated that over a million wildebeest and hundreds of thousands of zebra move south, spreading over the Serengeti plains like nothing seen elsewhere in the world.

In May’s edition of Volume 169, the beautifully endearing photography of a lioness and her cub basking in the sun at dusk, taken by Mitsuaki Iwago, is the cover shot of a larger portfolio inside the magazine.

Who murdered the mountain gorillas? (July 2008)

Originally appearing in the January 1970 cover of National Geographic Magazine, little has changed in the geopolitical landscape of Rwanda since American primatologist, Dian Fossey, sadly died in 1985.

Brent Stirton, who photographed this silverback mountain gorilla confronted by hostile life in a war zone in the Democratic of Congo, was a wanted man in 2007 when he took three photos not long after seven mountain gorillas were killed, execution style, which ended up being widely published in the world press.

Iconic for both its design, in that it bleeds out from the familiar yellow border of a National Geographic Magazine cover, but for highlighting how important Redwoods – The Super Trees – are to the ecosystem, especially in California.

The cover photo by Michael Nichols formed part of a stitched portrait made up of eighty-four individual photos that were taken as cameras rode a rope rigged by canopy ecologist Jim C. Spickler.

It’s one of man’s most desired accomplishments: to be able to fly.

Yves Rossy, Swiss aviator inventor, has come closest. Taken during his joint flight with Emirates Airline, this cover is one we’ll look back in years to come as a pioneering one of personal flight. Sure, some people can fly. But how long is it until flying will be readily available and even a commercially viable alternative to travelling in aeroplanes.

Defenders of the Amazon (January 2014)

A young Kayapo girl represents her Amazonian tribe with pride. Having her portrait don the cover of National Geographic in January 2014, she is not just symbolic of human defiance but she’s a girl who lives in Kendjam, northern Brazil, for who Martin Schoeller visited to document their story. Martin comments “she was shy… but she was always checking me out to see what I was up to.”

Despite modern-materialism like trainers and footballs, Martin says that these people are fine without us. What’s positively reassuring about this story is that it’s not the all-too-familiar tale of the demise of indigenous people from commercial forces.

The Kayapo people are taking on the modern world. And winning.

As part of National Geographic’s photojournalism series, that looks into the changing continent of Europe and how waves of immigrants of reshaping the landscape, Robin Hammond showcases how equally imperfect we are as a human race and – as different we are – the similarity of our intentions.

Following the conflicts in Afghanistan and the Middle East, Europe has seen a significant increase in asylum requests. In particular, Germany and Sweden have been receptive to these requests with Chancellor Angela Merkel’s welcoming statements last year having encouraged nearly two-thirds of people escaping from conflict to name Germany as their desired destination.

Another iconic magazine cover photograph and a historical issue indeed.

A memorable cover of Avery Jackson, shot by Robin Hammond, for the special issue focusing on the radical shift in gender “normality” across the globe. Iconic in the way it sparks discussion and educates readers who may not have previously understood how fellow humans feel when they grow into their gender.

The following words from NatGeo editor explain their reasoning, not that they have to, in an eloquent and pragmatic way: “for almost 130 years, National Geographic has explored the world through science, exploration, and storytelling. Gender permeates every part of what it means to be human, and reporting on the changing understandings of a biological and social concept is, put simply, what we do. We created the gender issue—as we do every issue—with the intent to research, understand, and explain.”

Jane’s chimpanzee research and conversation efforts over the past 60 years are more than enough for her to be described by National Geographic as an icon.

The cover photograph, shot by the colleague, friend and later husband of Jane’s, Hugo Van Lawick, are from reels and reels of film outtakes that were found – yes found – in 2015. Subsequently made into an Emmy award-winning documentary, the film was shot in the early 1960s at Gombe Stream Game Reserve, in what is now Tanzania. National Geographic assigned Hugo to document chimp behaviours but also to film and photograph what they called “human interest”—Jane playing with the chimps and even washing her hair.

Jane worthily graces the cover of National Geographic for the second time.

The final image of the most iconic National Geographic Magazine covers is an incredibly powerful one.

Illustrated by Jorge Gamboa, this image surpasses the Afghan Girl cover as the most famous by National Geographic. And rightly so. As the world continues to drown in single-use plastic, the iconic magazine has launched a multi-year initiative called ‘Planet or Plastic?’ and by bringing this to the attention of everyone who could have access to it, drives a further positively political position by the nonprofit organisation.

Those were the covers that we felt have been most iconic over the years.

Not only in their aesthetics but in the National Geographic Society’s fearless publishing of them to fight the good fight for what they believe in: the preservation of animals, highlighting war-torn areas of natural beauty, empowering women and their fight for gender equality; the advances in technology how we can adapt, the fight for humanity in immigration, and the end to our self-harming environmental damage.